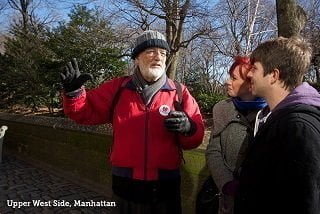 Founded in 1992 as the first “welcome visitor” program of its kind, the idea grew from friendly exchanges founder Lynn Brooks had with people she met on her own vacation travels around the world.Lynn realized that New York City suffered from an image problem: almost everyone she spoke to wanted to visit New York City, but thought the city was too dangerous, expensive and overwhelming.Lynn wanted the world to know New York City as she did: a great big small town with diverse neighborhoods, mom-and-pop stores, fun places to dine, and friendly residents who go out of their way to help an out-of-towner feel welcome.Today, there are about 300 volunteer Greeters who bring visitors to neighborhoods in New York City, and 30 volunteers who work in Big Apple Greeter’s office in every aspect of the program, from answering visitors’ questions and matching visitors with Greeters, to computer tech support and special events.Since its start in 1992, Big Apple Greeter has welcomed more than 150,000 visitors from all 50 states and 124 countries, with visits conducted in 22 languages.A December 2004 survey conducted by New York University Tisch Center for Hospitality, Tourism and Sports Management found that 97% of survey respondents said that their Greeter experience made their trips to New York City much more successful.
Take me to New York!
We use cookies to ensure that we give you the best experience on our website. If you continue to use this site we will assume that you are happy with it.OkNoPrivacy policy